Although I seem to be known as a Nurgle guy, my first army was Orks in Warhammer 40,000 during the legendary Rogue Trader era.  Why? Because no one played orks in our group and they forced me to.  I never won a single game during the Rogue Trader era. Things didn’t get that much better in 2nd Edition due to infiltrating Assassins with virus grenades or just the virus outbreak strategy card. There was a serious lack of play testing involved back then.

My friends made me assemble more models just so they could kill more models. That’s why my fantasy army sat undone but assembled for years. Me, I generally only assemble models I plan to paint. So pretty much any assembled but un-primed models in my household were put together at the urging and with the aid of Arden or Kathy or perhaps Paul… I don’t know what the obsession with bigger games is. I’m content to play 1500 points, in fact smaller games require you to make harder decisions when choosing your army list.

But that is not what this post is about. I’ve slowly been working through my massive collection of single pose plastic goblins, well massive for me. However I have almost as many single pose Goffs and Gretchin. In fact it is these models and a lot of losses to Eldar and Space Marines that moved me towards Nurgle. Now my Nurgle miniature collection is almost painted out and I’m doing other Chaos Powers, Orks and Goblins are still on my long term “ta do list”. I regularly stop in at the Waaagh forums. I’ve also starting doing test figures and what better models to test paints on then, 2nd Edition Gretchin. 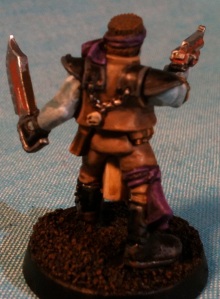 The black basecoated one was done up for some contest on the Waaagh that I didn’t have time for. The first grey one, was a test of Krylon Primer that went badly marring the face and the entire paint job. The third Gretchin and the 2nd grey one, the one without the squig on the base, was also primed with Krylon Grey primer. I discovered that Krylon Grey primer is the exact same shade of grey as Adeptus Battle Grey, or at least so close as to not matter. This may be useful information to Imperial Guard players and will prompt me to paint another test Servant of Decay.

My original test figure for my Servants of Decay army was painted over a black base coat and used Foundry English Uniform Brown triad for the main uniform color. Brown is a good army color and a good Nurgle color.  However the Nefarious Fire are black with purple flames so purple and flames was always going to fit into my Servants of Decay scheme too, but I didn’t want black uniforms. I was thinking grey uniforms… Now I think a plastic Goliath ganger will be painted up from a Krylon grey base coat and it will have grey clothing rather than brown…

However the point of this post is to show off the three gretchin I’ve been chipping away at, each with it’s own skin color. The black gretchin got the traditional Ork Flesh up to Bilious Green layer technique that has been used on greenskins since the Rogue Trader era. I only used a single wash on this model and it was the new Thrakka Green.

The poorly primed gretchin got a Gretchin Green basecoat, a color I never use in painting ork flesh, followed by a Camo Green highlight. Then the model was given two washes of Thrakka Green. Next it received another Camo Green highlight as the bad priming job obscures a lot of detail so it is better to paint highlights than rely on gravity to add lowlights for this model. Finally this model got Rotting Flesh and Vallejo Model Color Green Grey highlights.

The third Gretchin is an experiment into the wash your way to victory or at least wash your way to a nice fleshtone. John Blanche used brown paint and green wash to do some orks and that look has caught on some. TastyTaste seems to think using Devlan Mud is evil, but have you ever seen a model painted by TastyTaste? I haven’t. I’m pretty sure he’s not overly burdened by Golden Demons if you know what I mean.

People on the Waaagh forums have gotten good results using the new GW washes and various colors you wouldn’t associate with painting green skin. I took a stab at it and started with Dheneb Stone for my basecoat over the grey. This didn’t cover so well or look quite right so I immediately followed that with a quick highlight of Vallejo Model Color Beige. Then I got more on script and did a fairly heavy wash of Devlan Mud and after drying time, two fairly heavy washes of Thrakka Green.

I’m not sure how much time this really saves when you factor in drying time, but if you’re painting 40 Gretchin it probably does save some time. It is also a bit messy so doing the skin first then fixing the areas that are just primer is easier than doing the skin later and fixing more painted portions of the model.

It looked OK after three washes and just a single highlight, but I was highlighting the other models so I gave it a Green Grey highlight which fixed things some. Maybe the highlights are less realistic, but they look better especially at arms length. One thing about this Dheneb Stone and Beige technique is it leaves the eyeballs and teeth looking decent, where as the dark green traditional method you definitely have to work on the teeth and eyes more to get them to look right. I’m still not sold on painting over grey, tomorrow I will try out red, metallic, and some other common colors.