These are the first five models I’ve finished in a long time. I’ll take better photos tomorrow assuming we get some sunshine here in Vancouver. I’ve been chipping away at these models the last three or four days. I’ve finished rewatching every Battlestar Galactica episode and now with this time sink out of the way I can get back to looking for a full time job and volunteering. I’ve gotten good at volunteering again.

I had them mainly finished but extra work needed to be put into the fancy resin bases. I also needed to do a few minor touch ups and paint the eyes. I left the skull head assault marines with just black holes for eyes, it looks creepy enough. Sometimes when you go to do the eyes you screw up the face some, especially if you’ve been sweating and drinking.  Sometimes I leave the eyes until the next morning, but this time I just pushed on.

I snapped one last pick to prove they are done and then worked on this here blog update. There are four more models unpainted and unassembled that constituted part of my proposed Astronomi-con Vancouver army, but I’m not going to work on them. I have some other models that are unpainted but assembled. Some of them are even primed.  These models are going to get some attention. I don’t like leaving things undone. If I’m going to paint something I’ll take it out of its packaging and work on it, otherwise it can sit in a box until I get around to it. 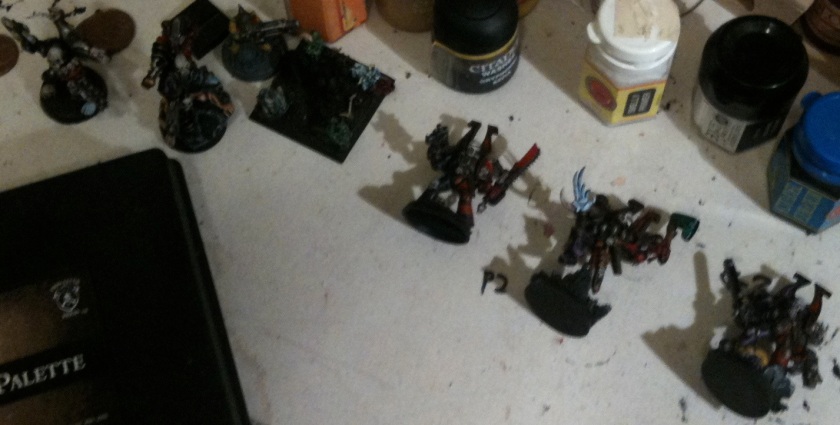