Although I decided to start a dedicated hobby blog, I also decided not to import all my older hobby related postings from my personal blog into WordPress.com, instead I give you this top 10 list for the benefit of anyone stumbling upon my work for the first time.  Greatest hits particularly in the top ten format are popular with websurfers so read on McDuff:

3: Phantom of the Rock Opera

Are you new to blogging, and do you want step-by-step guidance on how to publish and grow your blog? Learn more about our new Blogging for Beginners course and get 50% off through December 10th.

WordPress.com is excited to announce our newest offering: a course just for beginning bloggers where you’ll learn everything you need to know about blogging from the most trusted experts in the industry. We have helped millions of blogs get up and running, we know what works, and we want you to to know everything we know. This course provides all the fundamental skills and inspiration you need to get your blog started, an interactive community forum, and content updated annually.

It seemed to me that before the posts were appearing in reverse chronological order. I’ve never seen that before, WordPress is always adding new features which is another reason I have a WordPress.com blog, but also a self hosted blog that I can test things out on.

I dug up another photo which probably hasn’t been widely seen, instead of an Ork Nob it contains three OOP (Out of Print) Chaos Terminators. I’ve got a lot of painted terminators that I never use, I plan to rebase them. I have some of the Forgeworld Nurgle ones on my table which I’ll get to in a couple months, they seem to always get put off, as mainly they are just for fun figs. Nurgle terminators are too expensive pointswise to use regularly in small scale Warhammer 40,000 games. 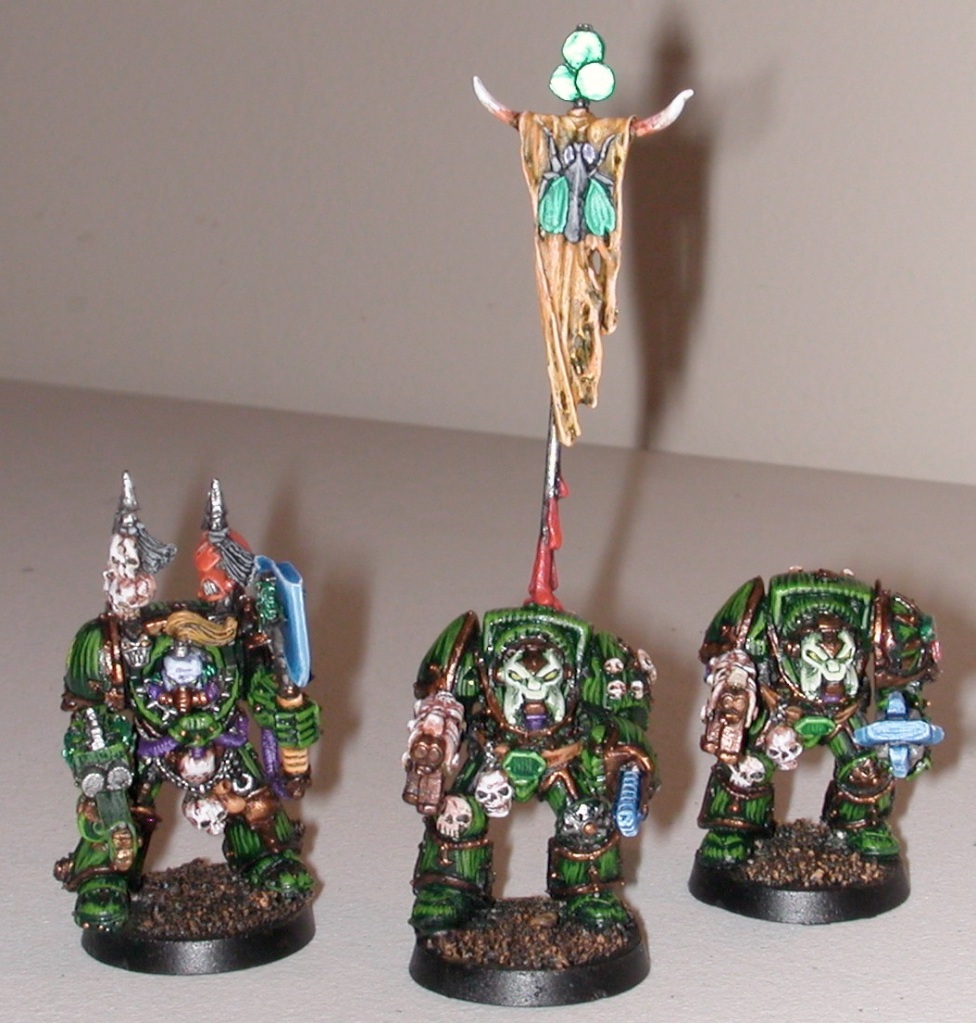 I painted them quite a while ago, I’m not even sure they’ve all hit the gaming table, but they probably have by now.

It is now many years later and I’m editing all my old blog posts to improve the taxonomy. I did rebase these models but based on the new Death Guard Codex many of them are unusable. Nurgle err Death Guard terminators can no longer have power weapons. Plague marines can no longer have flamers. So basically every squad in my army needs updating with new models and probably champions. Plague marines can also not have bolt pistols again. I will have to look into the regular Chaos Codex but first I need to get back into the habit of painting regularly and and actually play something, even if it is Warcry.

So as I mused, I’ve started a dedicated miniature painting blog for my various hobby projects. Hopefully I’ll get off my ass in the next few days and paint something fresh for the masses. I still need a job, so look at my resume!

I’m not going to move content over here from my personal blog, I’d rather spend my time creating new content and painting new miniatures rather than just import old text and pictures. Plus I don’t like broken links, I remember when people cared about broken links, now people just trust in Google.

So what will be here? Everything I do hobby related basically. Nurgle.muschamp.ca isn’t going anywhere, but it is a huge hand coded site, to an army that I’m going to use less as I paint some new stuff, I’ve ran just about every Plaguemarine squad possible. As I’ve gotten older, I’ve matured and I stay out of online pissing matches when I can, I still contribute to the odd forum, mostly the Bolter and Chainsword but occasionally the Waaagh or elsewhere. I’ve been at this a long time, I have WIP threads that are years old, but I’m not sure if my efforts get viewed by that many people, so hopefully Google will find this stuff and it turns out to be of use to someone.

One thing I have imported by hand into WordPress.com is links. I’ve been collecting links since 1994 or 1995, my biggest collection is pretty out of date, but more recent useful finds, were added to the sidebar for the benefit of all.

What you will also find here is some well painted miniatures and occasionally tutorials and advice on how to improve your painting. Back when I was employed I bought a lot of paint and models, so I try stuff out, rather than stick to just GW paints and models. That said most models I paint are for Warhammer 40,000 or 40K as it is known online. One of the more famous things I’ve put online is the Diseased Sons homepage, so additions to that army along with the Nefarious Fire and new incarnations of Waaagh Musk will appear here.

I’ll continue using Flickr for finished models in higher res, but I’ll probably put most of my Work In Progress or WIP photos on WordPress.com, previously I used Muschamp.ca and I still may use it for somethings. I pay for the bandwidth on Muschamp.ca about 10 bucks a month, I get about as much free from WordPress.com maybe, but they throw the odd ad around my text and pictures. I’m happy with the theme I picked, it is new and gritty, and called Greyzed. Thanks to the Forge Web Creations for that, apparently they are from South Africa, small world nowadays, especially online.

We’ll have to see if a more focused blog on WordPress.com rather than self hosted leads to an increase in popularity, as measured say by number of comments. I always got traffic from the search engines, often from very strange keyword referrals, but I’d like a more social and interactive site, though that said it is just a hobby blog, if I get busy with my new job it will languish for a while.

As you may have noticed, I have a tendency to ramble, which is why Muskblog is an unfocused mess after being updated very regularly for years. This blog will be focused on miniature painting and the hobby, if I want to rant against bad service at a restaurant it won’t appear here, neither will pictures of my sister’s dog, or any baby photos, or any thing else that will pollute the purity of Musk’s Miniatures.

I own a lot of miniatures, a lot of them are painted, but a lot of them aren’t. Even if I never buy another model, I’ll probably never get them all done.  I’m going to have to have a liquidation sale someday. I own a lot of older GW miniatures that I either bought back in the day, traded for, or got on say eBay. I don’t have any immediate plans to sell anything, but at some point it is a good idea. I’m building something of a dream table for wargaming, but it has gone slowly. I got hundreds of dollars tied up in resin and other stuff like foam, plasticard, and balsa wood. I kinda wish I had some of that money back right about now seeing as how I’ve been unemployed for over two months and I’ll always be paying for my MBA.

I promise this is the least focused and most off topic post that will appear here. I need some text to test the theme further and make sure tags and categories are working well. There are links to a lot of photos of my miniatures on the sidebar, but lets see if I can’t dig something interesting out of iTunes to see how the theme handles images.

I don’t currently have access to a good digital camera, remember I’m unemployed.  I do have an iPhone 3GS which takes surprisingly good pictures of miniatures in my lightbox setup.  I also know a number of pro and semi-pro photographers, maybe I’ll con one of them into using their 1000s of dollars worth of equipment to take photos of my minis.

I also might submit this hobby blog to various specialized blog networks, that seem to be all the rage in online hobby circles.  I’m not sure how much more traffic they’ll add, but now with a focused blog and hopefully a month or two of good original content I’ll be eligible to join one or two.  In the mean time we’ll have to wait and see who’ll be the first to link to this blog and leave a comment besides me.