Regular Vancouver tournament nemesis James Russo called me up the other day. He has been working on a scenario for Astro Vancouver based around the GW Battleboard and the hill I donated to last year’s Astronomi-con. He’s dubbed it the battle of Muskie Hill.

We played on Thursday, I had had two job interviews that day, and still ended up unemployed. So after ditching my suit and since my Nurgle terminators are queued up on the painting table, I decided to finally re-base my old ones on 40mm round bases. I thought I had enough, but turns out I was three short, the three I used to base the Forgeworld Deathguard Terminators, they should have been on resin bases I guess…  I can’t remember every detail of every modeling project I ever planned out, that’s why you write stuff down.

I decided to use 2 part resin epoxy because gravity would hold the models to their new bigger bases. However the fancy syringe device I bought to apply the epoxy didn’t work. The yellow part was two viscous or solid to expel from the tube. So I ended up with a bit of a mess and sub-optimal mixtures of epoxy resin. I used a lot of toothpicks to get the other part of the resin mixture out of the syringe and though it took a while, all the bases held together for the trip to James’ house and the entire game. I also begged three more 40mm round bases off of James while there.

For an army list I decided to use at least one of the new Nurgle Havocs I’d just finished painting and went with my 10 man, Plasma Gun and Autocanon squad that I dreamed up years ago and finally finished painting twins of. Then I brought my “Longed Four” Havoc squad with four more autocanons and if you hadn’t guessed it, I fielded yet more autocanons with the Nurgle Terminators. Picking all these squads was easy, and I threw in another squad that I’d been dreaming of using since before the latest codex came out, Noisemarines.

James couldn’t grasp this squad, it is six men, with one single Blastmaster. It is cheap, fearless, has a heavy weapon, and can move and fire the heavy weapon. It is going to remain a staple of my army for the year leading up to 2011 Astronomi-con Vancouver.

I needed some HQ so since portability in addition to autocanons and just plain time spent sitting on a shelf were the attributes I picked this army around, I went with two Chaos Sorcerers. Most people don’t seem to dig on them, but they can be cheap HQs and if they get lucky can do damage with their Force Weapon. I never get lucky. 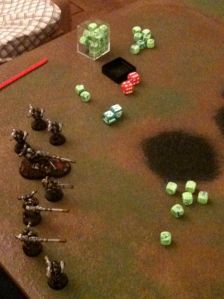 The other thing I got to debut at James’ house were my new dice. I’m notoriously unlucky, and another regular tournament nemesis is color blind and my old nurgle dice were hard to read. So I got new ‘toxic green’ dice which I had to wait for them to restock at a store online.  I also got green Bolter and Chainsword dice which proved a lot easier to read than the toxic ones and will be my main gaming dice going forward. Finally I ordered some special red dice for plasma guns as the one is replaced by a skull signifying you burnt yourself. It shouldn’t change the odds, but if used consistently can speed up the game. Big B&C green dice for heavy weapons, little toxic dice for bolters, red dice for plasma guns. Shooting should be a snap for all.

As I pulled out my miniatures at James’ house, I realized Internet experts will hate this army. I also broke all my own little rules, that I’ve been following when building armies for tournaments.  I had:

What I had was a bunch of autocanons, a bunch of bolters, a bunch of toughness 5 models and a few initiative 5 models. I also had a 400+ point squad that was just a collection of figures. I’d used ten terminators in a squad once before, because it used to be fairly portable, but with the new bigger bases I need to use my biggest miniature case to transport them. They did well against Rob’s Imperial Guard, but it seems likely they are unlikely to earn their points back, and that they’d ultimately end up under a pie plate or other wonder weapon.

They have one thing going for them, they are a total surprise, no one plans to kill ten toughness 5 terminators. It just isn’t on people’s radar or playtesting lists. I use little kid tactics with them, I walk forward and shoot. That is all they do until they have to fight in H2H which usually goes pretty well for them, but it is their mobile anti-Infantry firepower that is fun. They also kill Chimeras pretty well.

I quite liked this army and if the weather improves may take a variation of it to Strategies tomorrow for a little more gaming action. But right now it is pouring down rain. This is kinda the army I was thinking of taking to Trumpeters. I don’t want to have to paint anything special, but I think drop one Nurgle Renegade Squad and a sorcerer, add some Plaguemarines in a rhino and for even less optimal autocanon love, a dreadnought, the Beast Rabaan. Also based on how the game went, some melta bombs and another Chainfist would be nice. But I don’t want to paint another terminator, so I may just make the chainfist guy a champion for an extra attack.

James’ mission revolves around taking a flag at the top of a hill.  So it is basically a higher ground or king of the hill type mission. I’ve played those before but with no APCs and no dedicated assault squads I was in for a bit of a slog. I was expecting Tyranids so I planned to just blast them with autocanons and then use the termies to contest. The sorcerers didn’t end up doing much, neither did the Nurgle Renegades, the squads that saved the day were the Noise Marines and their Initiative 5, plus their sorcerer buddy, Lefty with his Initiative 6 and of course the steady diet of 8 autocanon shots the “Longed Four” kicked out every turn. Terminator armor and cover are all well and fine but I got off 48 shots with autocanons from that squad alone during the course of the game.

James’ army was Codex Marines, I think he called them the Emerald Guard or the Emerald Legion. They were green and I’d never seen them before. They were still WIP, but for the most part had a tactical squad, a devastator squad with 4 missile launchers, a terminator squad with a cyclone missile launcher, two scout squads, a Librarian in Terminator Armor, a twin-linked Lascanon dreadnought and three landspeeders in a squadron that I never shot at once.

The game went how I expected it. Both sides advanced most of their army up the hill. Difficult terrain rolls play a factor, but you can run, if you decide not to try and shoot. James got a lot of cover saves, me not so many. Since power armor gives you a 3+ save, often I set up to maximize what I can see and just suck up the incoming fire. The terminators drew a lot of incoming fire. James’ dread rolled a lot of ones. Eventually there was H2H between the surviving three terminators and the dread, plus the Nurgle Sorcerer McFly who was hanging around with them for safety. He couldn’t hurt the dread, only the Chainfist dude could. So despite penetrating every round I rolled a 4, then a 3, then a 2 as the game dragged on.

As alluded to, the Noisemarines without Sonic Blasters walked forward and fired their Blastmaster. Their sorcerer tried to cast his spell (Doombolt) but was nullified. Eventually James charged them with his ‘assault’ scouts. I thought this was a mistake and told him that at Initiative 5, I was going to enjoy going first. I think he charged in some tactical marines eventually too. The sorcerer and his Force Weapon which counts as a Power Weapon did his thing. 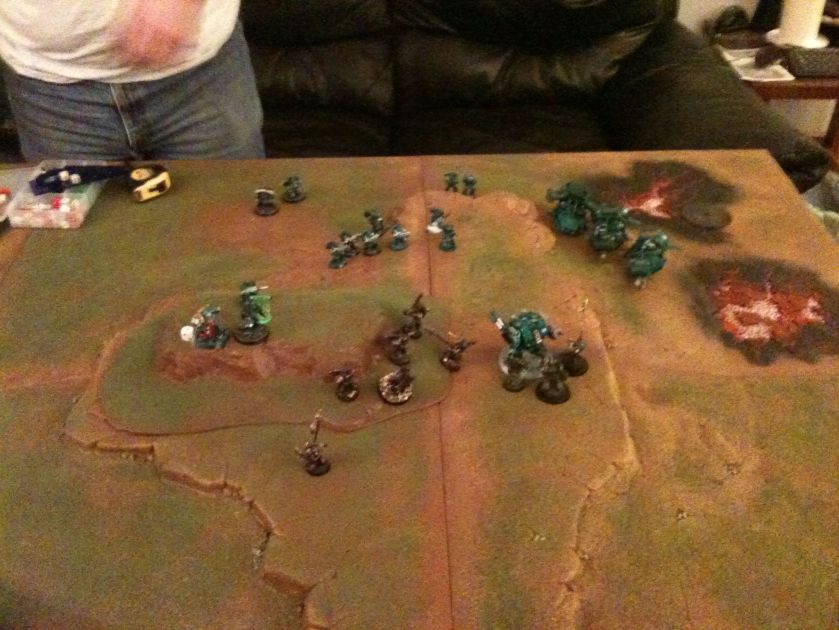 The two Nurgle Renegade squads didn’t do so much. One was forced to take point on the assault up the hill and was reduced to one model fairly rapidly. That model then skulked around for a turn or two before dying. The other squad fired their autocanon and eventually their plasma gun more and advanced much more slowly. They eventually ran for it as the game came to a close.

If the game had ended on turn 5, James would have won, but it continued and my Slaneesh Sorcerer was able to defeat his foes and run to within 3 inches of the flag with his consolidation move. If the game had gone another turn, James had planned to fly the Speeders on top of the flag and there would have also been a Chaos Sorcerer VS Space Marine Librarian hoedown. I may have also gotten some more guys on top of the hill, or just blasted James off with another volley of Autocanon shots.

There were secondary objectives that I largely ignored. Also my Havocs took a strength 5 hit from an earthquake or something for not getting on the hill. They were fine. It ended up a 7-7 tie as none of James’ carefully chosen secondary objectives and mission penalties applied.

Scoring seven points in an Astro game is pretty damn good. Maybe not good enough if you want to win best general, but seven is well above the average score I usually earn, and with a totally thrown together army too.