After an over three year break, I finally paint another 28mm model. 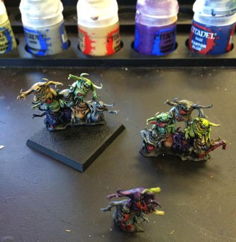 So I went to see some old friends who just happen to run a gaming store. So while we were talking they said, why don’t you buy a model and paint something, so it became something of a challenge. The models I bought were the new (to me) Nurglings and I used the store paints and even more challenging the store brushes to paint one stand.

I never timed it, I wasn’t in a big rush, I picked Nurglings because I like to paint them and they are good to experiment with, they also can’t look wrong. I used five different colours to basecoat with, one grey, one purple, one green, one blue, and one brown. I never wrote the paint names down, I can’t even pronounce GW’s current paint names. But a clever person could figure out what I used.

I painted the model in three pieces until I got to the highlight stage. I used just one very well-used starter brush which made doing good eyes and teeth almost impossible. I had to repaint a lot of lips and noses. In the end I just had to say good enough because the store had to close.

I used every wash err “Shade” but the red one because it had ran out. I used purple and blue to shade my red. I also used the red glaze some. I tried one of the dry paints, it isn’t for me, but I can see how it would help painting an army of skeletons for instance. Finally after I used many many washes and I used the flat of the brush to do my highlights such as they are, I tried the texture paint to do the base. It never dried in time to highlight, I even used some special tool to apply it.

People badmouth GW but they make nice models, expensive, but I spent about six hours painting this one stand of Nurglings. I’m old, my back seriously had seized up by the time it came to highlighting. I could have done better with some better brushes, even using a smaller brush to do highlights and the faces would have helped, but I stubbornly stuck to the one brush even after it became less and less pointy. As Owen noted this was the first model I had ever painted in a store. Usually I go home paint with my paints, with my brushes, which I keep reasonably good care of and sort my colours specifically from lightest to darkest. This model was very much ‘winged’.

If I can get a new job and a new place to live, I’ll put together a painting desk. I’m one of the few people in the world who wants to paint worse. I spent maybe six hours on this Nurgling from opening the package to taking the last photo, Owen looked it up, it was a 15 point model in an army I don’t want to use needing a book I don’t own. So since 1500 points is the standard Warhammer 40,000 game size where I come from, I only need to paint 99 more Nurglings to have an army. If I want to get an army painted I gotta choose models that are easy to paint and high points value, which is why I never start a new army err faction as GW terms them now.

Of course I already have painted almost a dozen Nurgling stands and plenty of other Nurgle demons, more than enough for a 1500 point army, they just wouldn’t be much of a force seeing as how I don’t even know the rules, let alone know enough to build an effective army. Unlike everyone else I’m not big on summoning or deep striking, I’m more into just painting stuff that looks cool.

I actually think I did a better job on the backs of the Nurglings, but I never took a photo of the backs, when the model is finally officially done, based and sealed I’ll take another photo. The tips of the horns kept rubbing off, it’ll be tough to match the paint perfectly, someday I’ll paint again, it was July 18th 2011 when I last finished a model. My back is so shot. Six hour painting days or other long, long days in front of a computer is hard on the back, so what do I do when I get home? Update this blog and pour myself a whisky.

5 thoughts on “Painted a Model”