Recently I bought some more Citadel Contrast Paints along with some Wraithbone to try them out. And although I don’t need them for Warcry and Bill thinks I’m crazy to want to paint more Nurglings, I thought they’d make a great test model for the new style of GW painting. To keep Bill happy and because I actually eventually want to play something, I built all the goblins and squigs I needed for my proposed gang. I even opened a blister I’ve had since the 90s, not sure if it counts as Oldhammer.

Also on my miniature painting table are apparently 30 year old Gretchin because again I have them and thought they’d make a good model to test out new and old paints. I have a lot of old paint that has dried out after years in storage. I also have some black primered metal Nurglings as I’ve long had a dream of a Nurgling heavy 40K army. I was at first going to do 30 stands, then I downsized to 15, but now I’ve decided to go for 27, three squads of nine. As mentioned, Bill thinks I’m crazy.

It should go without saying that you need a light undercoat/basecoat to use the Contrast Paints. I chose Wraithbone after reading and watching tutorials online. I also tried some over a darker grey primer from Krylon. It doesn’t work as well, though some swear by a medium grey primer. I’m not sure the Diseased Sons will be converted over to using Contrast Paints, but I’d like to try it on a larger model. I’ve long maintained I don’t want to paint better, I want to paint more efficiently. Of course I just spent hours painting a single stand of Nurglings.

I also painted part of two squigs and worked on more Nurglings. First if you are going for speed, don’t paint your Nurgling stand in pieces. I do think if you basecoat everything at least then assemble it’ll look better, but if speed is your goal, glue then prime. Also don’t paint every Nurgling a unique color. I’ve done a whole stand the same color before, even dry brushed them and it doesn’t look as good as having multiple coloured Nurglings. You can of course choose only two or three colors. You can add further variety by using various washes. That is what I did.

I used every Contrast Paint I had as a skin tone except Skeleton Horde which I saved for the horns. I used a variety of washes, glazes, and inks. I did not use Army Painter Strong Tone something I bought on Bill’s recommendation. Sometimes I used multiple coats of Contrast Paint, sometimes I did not. I even painted some Nurglings regular old GW colors like Camo. I also used Vallejo, Reaper and Foundry paints. In fact for the back row of green Nurlings I did several ever lighter custom blended dry brushes, then of course more washes and Contrast Paints. I also sometimes painted directly in the folds, rather than covering all the skin.

For the Nurglings and the Squigs I touched up things like teeth, horns, eyes, and guts with Wraithbone, sometimes more than once. For the Nurglings I could afford to be a bit sloppy and I did some blood and guts spilling out with reds, but I also used the new Nurgle Technical Paint. I will have to try a “dry” paint. I poopooed them, but honestly I have so many unpainted models. I’m not above dry brushing, especially Nurglings.

Although I did take many photos and consulted Bill, I didn’t write down every paint I used on every Nurgling. It will be hard to duplicate any particular one, but the official Nurgle tutorials online are pretty good. I think for my next stand I’ll only use the green contrast paints, maybe skeleton horde on some skin. Then I’d use a variety of washes and inks, obvious colors like greens and browns. I didn’t use any Devlan Mud on these ones, I prefer to carefully apply my washes and inks, rather than the bath technique. I’d do what I did before and dry brush on highlights, then paint the details in Wraithbone again.

That should speed up the process some. 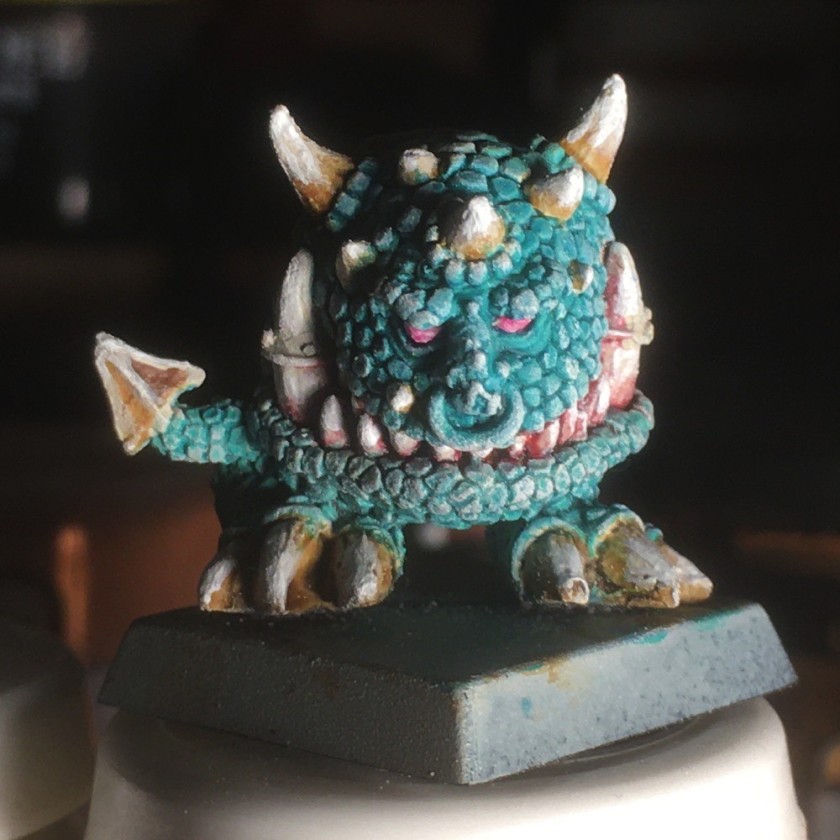 It has been cold in Calgary lately and I have a bit of a cold, but it is #MiniatureMonday so I will try to get this post published. If you have questions you can leave them below. Sorry the photos are not the best, the lighting is not the best in my living room, which is why I have so many lights attached to my desk. I might buy or set up a photobooth someday, but for now quick iPhone snaps will have to do. I’m not trying to be #Instafamous.